Oppo A8, an upcoming smartphone from the Chinese smartphone maker, has been spotted on the Chinese regulator TENAA’s website. An alleged poster showing the phone has also popped up online and claims to reveal the phone’s design and other details. The TENAA listing suggests that the successor of the Oppo A7 will see an update on the camera front, at the least. The Oppo A7 was launched in November last year, so a successor should launch before the end of this year. The phone was listed on the poster alongside a new Oppo A91 phone, the Oppo Reno 3 and Oppo Reno 3 Pro 5G.

Starting with the TENAA listing, an Oppo smartphone carrying model number PDBM00 has been listed on the regulator’s website. This phone is believed to be Oppo A8. The listing shows the phone running on Android Pie, and packing a 6.5-inch HD (720×1600 pixels) TFT display. The phone is powered by an unnamed 2.3GHz octa-core processor, paired with 4GB RAM. Internal storage is listed to be at 128GB with the option to expand further using a microSD (up to 256GB) card slot.

If the listing is any indication, Oppo A8 should pack a triple rear camera setup – with one 12-megapixel sensor, an 8-megapixel camera, and a 2-megapixel shooter. Up front, the phone has an 8-megapixel selfie camera. It will also include Micro-USB port, measure 163.9×75.5×8.3mm, and weigh 180 grams. The Oppo A8 is listed to pack a 4,230mAh battery, and should be available in Black, White, Green, and Red colour options.

The images attached with the TENAA listing show a waterdrop-style notch on the Oppo A8, triple rear camera setup at the back aligned vertically and placed on the top left of the back panel. The phone is seen sporting a rear fingerprint sensor, power button on the right edge of the screen, and the volume buttons on the left. To recall, the predecessor Oppo A7 was launched in November last year, and it came with a dual camera setup, and a Snapdragon 450 SoC.

The leaked poster on Weibo reiterates that same specifications and design aesthetic. The phone is seen in Red, Black, and White colour options, and the triple camera setup at the back is visible. The leak reiterates that the Oppo A8 will have a 6.5-inch display, 128GB internal storage, and a 4,230mAh battery. 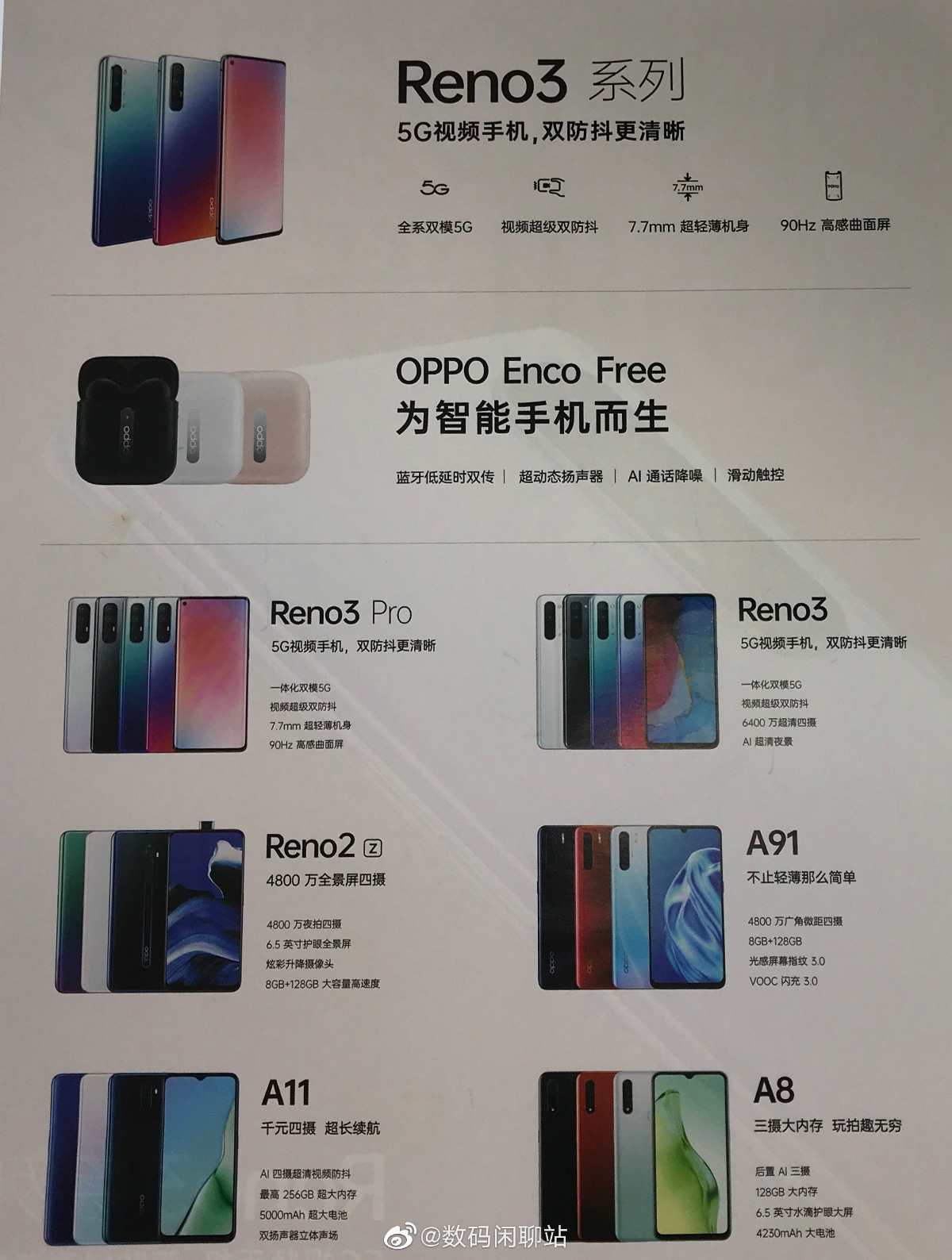 The poster has listed other phones as well, namely a new Oppo A91 phone. It is seen sporting a waterdrop-style notch, a quad camera setup at the back placed vertically, and Red, Black and White colour options in gradient finishes. The phone is listed to pack a 48-megapixel main camera, an 8GB RAM, 128GB storage, and VOOC 3.0 fast charging support.

The upcoming Oppo Reno 3 and Oppo Reno 3 Pro 5G have also been listed in the poster, and the Reno 3 is seen to sport a waterdrop-style design, a quad camera setup at the back, 64-megapixel main camera, and 5G support. The Oppo Reno 3 Pro 5G, on the other hand, is seen to sport a hole-punch display, and a quad camera setup at the back. The phone is listed to offer 90Hz display, 7.7mm thickness, and 5G support. The two phones are set to launch on December 26. The poster also mentions the upcoming Enco Free wireless earbuds that are set to launch alongside the Reno 3 series. The earbuds have been listed in Gold, White, and Black finishes.