Recently, we compared the Poco X2 (Review) with the Realme X2 (Review), and it was a pretty neck-and-neck battle in which we found the Poco X2 to offer a slightly better overall package, especially because of its price. Now, it’s time to pit the Poco X2 against a rival from its own home turf which is even more affordable — the Redmi Note 8 Pro (Review).

Packed with a powerful processor, impressive camera specifications, a large battery, and a premium design, the Redmi Note 8 Pro offers a lot of bang for the buck especially at its starting price of just Rs. 13,999. On paper, the Redmi Note 8 Pro seems pretty evenly matched against its cousin, but is it the better buy or does it make sense to pay a premium for the Poco X2? Let’s find out.

The Redmi Note 8 Pro is clearly more affordable than the Poco X2, across variants, and is easier to buy too, thanks to limited supplies of the Poco X2 this soon after its launch, resulting in period of flash sales. However, there’s a reason the Poco X2 costs a bit more, which we’ll get to in a bit.

Both smartphones have very good build quality and look pretty stylish. The Redmi Note 8 Pro comes in a more sober choice of colours, whereas the Poco X2 comes in brighter and more striking finishes. The glass backs on both phones are resilient to scratches, adding to the premium feel. They both have similar weights and thicknesses, although the Redmi Note 8 Pro is a tiny bit lighter.

You get a USB Type-C port, speaker grille and headphone socket at the bottom of both phones, and an IR emitter on the top. The Poco X2 has a hybrid dual-SIM tray, which means you can either use two Nano-SIMs or a single SIM and a microSD card. With the Redmi Note 8 Pro, you have the luxury of using two Nano-SIM cards and a microSD card at the same time.

At the back, both phones feature a vertical camera strip. Both the Poco X2 and the Redmi Note 8 Pro have four rear cameras. The former has a circular design around the camera module, which helps it stand out from other phones.

It’s impossible to pick a winner here as both phones feature very good design and build quality. Both are almost equally heavy, and not very easy to use with one hand due to their large screens.

The Redmi Note 8 Pro is powered by the MediaTek Helio G90T, which is a powerful, gaming oriented SoC. The Poco X2 uses Qualcomm’s Snapdragon 730G, which is the same one used by the Realme X2. Both are octa-core processors but Qualcomm’s offering is built on the newer 8nm fabrication process, compared to the 12nm process for the Helio G90T. On paper, this should make it more power efficient.

Both processors are more than capable of handling everyday tasks, and with normal usage, we didn’t notice any stutter or lag when in the interface or while multitasking on either phone. We tested the usual games such as PUBG Mobile and Asphalt 9: Legends on both phones, and these games ran very well. The Redmi Note 8 Pro was able to run both games at high graphics quality, but after about 20 minutes of gameplay, we noticed that the phone got quite hot. The Poco X2 also got a bit warm after the same amount of time, but not as hot as the Redmi. 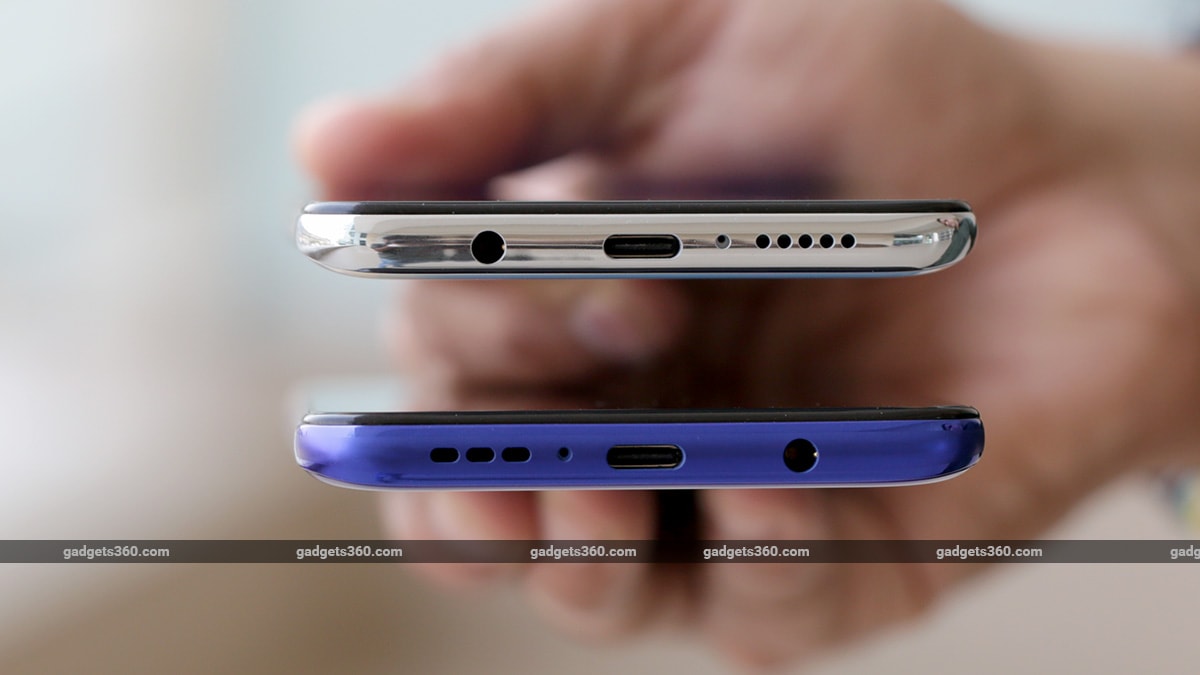 Both phones have connectors on the bottom

Both phones use LCD panels and HDR is supported too. The Poco X2 has a slightly larger display at 6.67 inches, compared to 6.53 inches for the Redmi Note 8 Pro. Both have full-HD+ resolutions, claimed brightens level of 500nits, and Gorilla Glass for protection. The Poco X2 has a slight edge here as it supports a 120Hz refresh rate, compared to the standard 60Hz refresh rate on the Redmi Note 8 Pro.

The Poco X2 also has a more modern-looking display cutout, thanks to the dual hole-punch design compared to a wide notch on the Redmi Note 8 Pro.

We found both displays to have very similar performance. Both get adequately bright, and with the same colour profile set on both phones, they handled HDR content very well too. We did notice slightly better contrast on the Redmi Note 8 Pro in some HDR clips but this was only really noticeable when examining both displays side-by-side.

The Redmi Note 8 Pro and Poco X2 both have a single, bottom-firing loudspeaker. Of the two, the Poco X2’s speaker is noticeably louder and has more detail and warmth. Vocals are crisp too and even little nuances in dialogue are easily audible. The Redmi Note 8 Pro doesn’t sound tinny but simply isn’t as loud or detailed as the Poco X2.

The battery capacities on both phones are identical at 4,500mAh, and we got similar run times from both phones in our HD video battery loop test. The Poco X2 ran for 13 hours and 43 minutes, while the Redmi Note 8 Pro ran for 14 hours. However, charging the Poco X2’s battery is quicker thanks to the included 27W fast charger, compared to the 18W fast charger bundled with the Redmi Note 8 Pro. 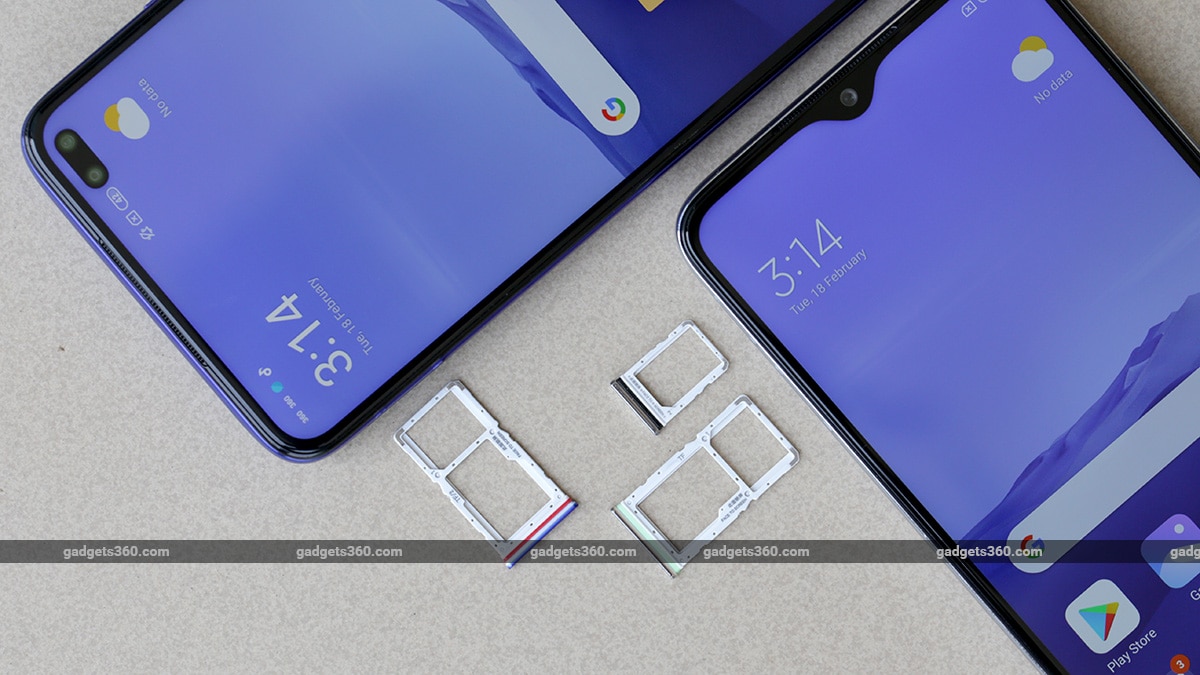 The Redmi Note 8 Pro (right) has a dedicated microSD slot, while the Poco X2 (left) features a hybrid one

Since both phones run MIUI, their camera apps are very similar. Both smartphones support 4K video recording, slow-motion video at 960fps, and the ability to shoot at the full 64-megapixel resolution.

In daylight landscape shots, the primary sensors of both phones captured good details but we preferred the white balance in photos taken by the Poco X2, as they more accurately captured the tones of our subjects. The wide-angle camera manages to cram a lot more of a scene into the frame, and here it was the Redmi Note 8 Pro that produced better detail with less noise, even though the colour tone wasn’t entirely accurate. 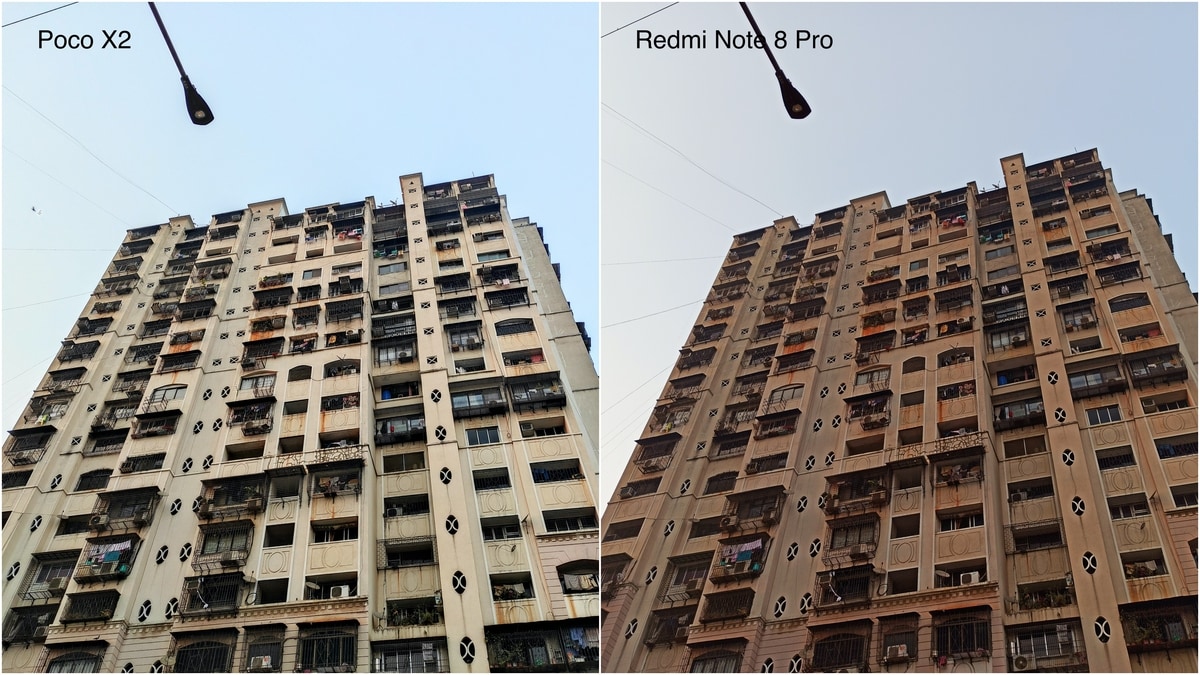 In close-ups of bright, colourful subjects, both smartphones struggled with colour saturation. The Redmi Note 8 Pro did a slightly better job, but the reds in both photos were wildly exaggerated. Switching to the dedicated macro cameras, it was the Poco X2 that captured more accurate colours, although both phones’ sensors captured good amounts of detail. 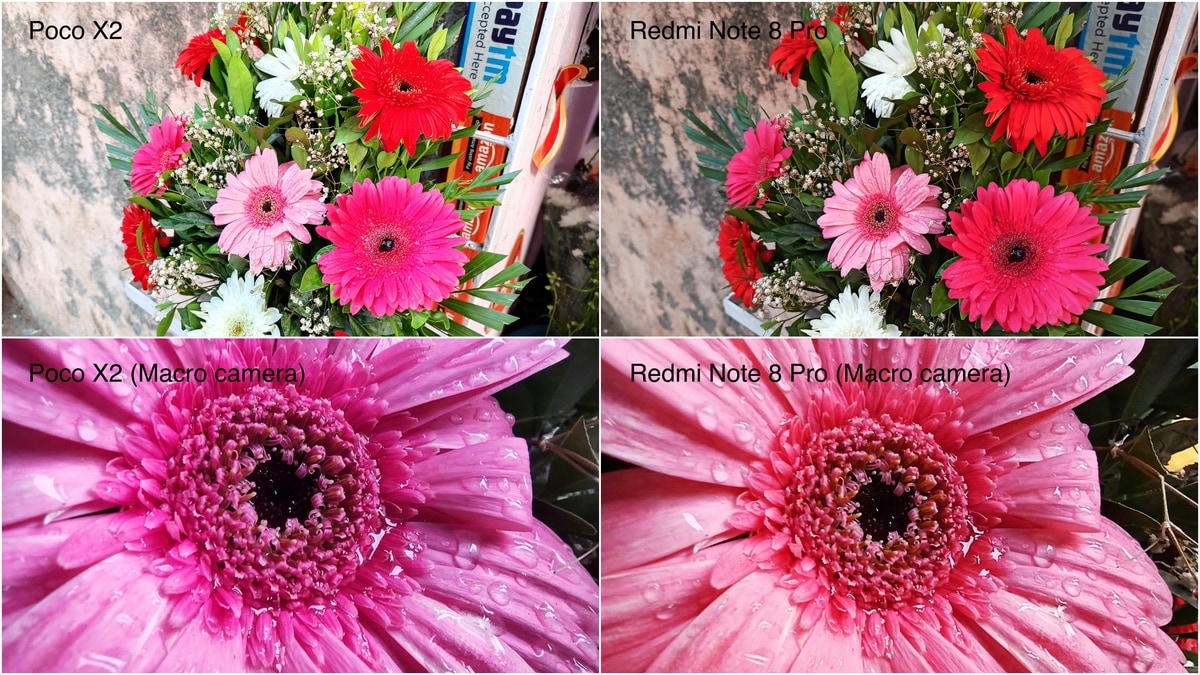 Portrait mode works well, and both phones give you the option to adjust the background blur before and after taking a shot. Edge detection is handled well on both devices. The Poco X2 tends to sharpen subjects a bit more, and also had slightly better exposure than the Redmi Note 8 Pro. 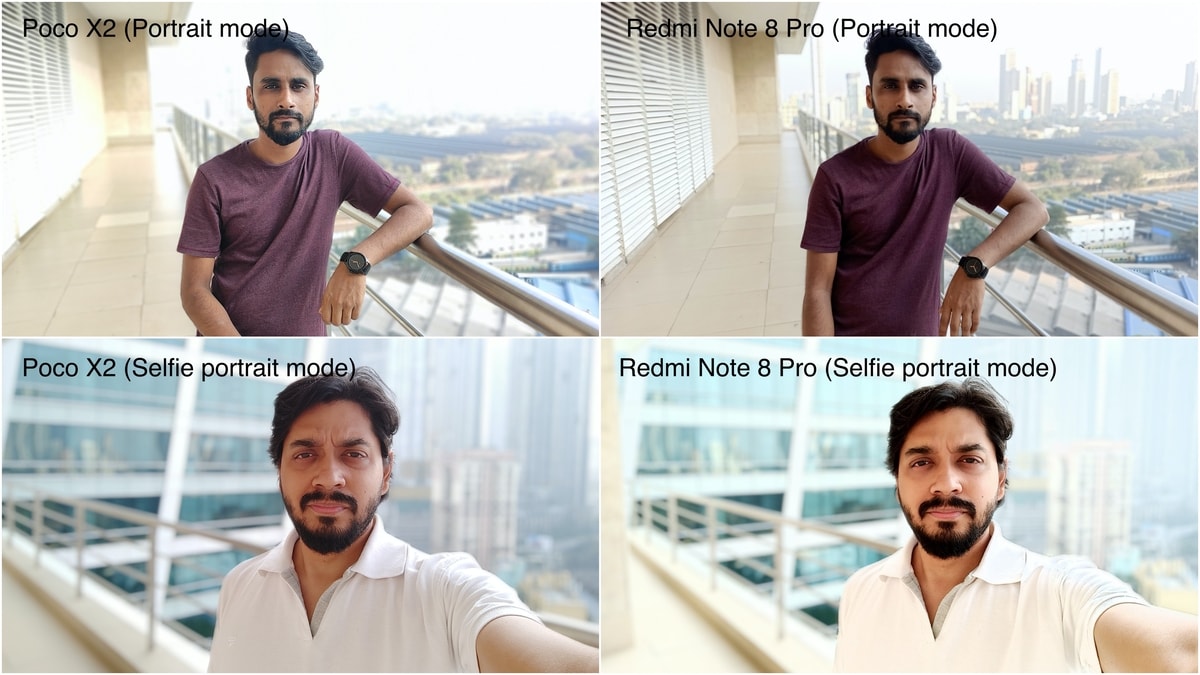 For selfies, the Poco X2 once again had slightly better exposure, and skin tones looked more natural when compared to shots taken with the Redmi Note 8 Pro. Even with Portrait mode, it delivered a slightly better background bokeh, although edge detection on both phones was similar. When shooting against the light, it was the Redmi Note 8 that handled HDR better. 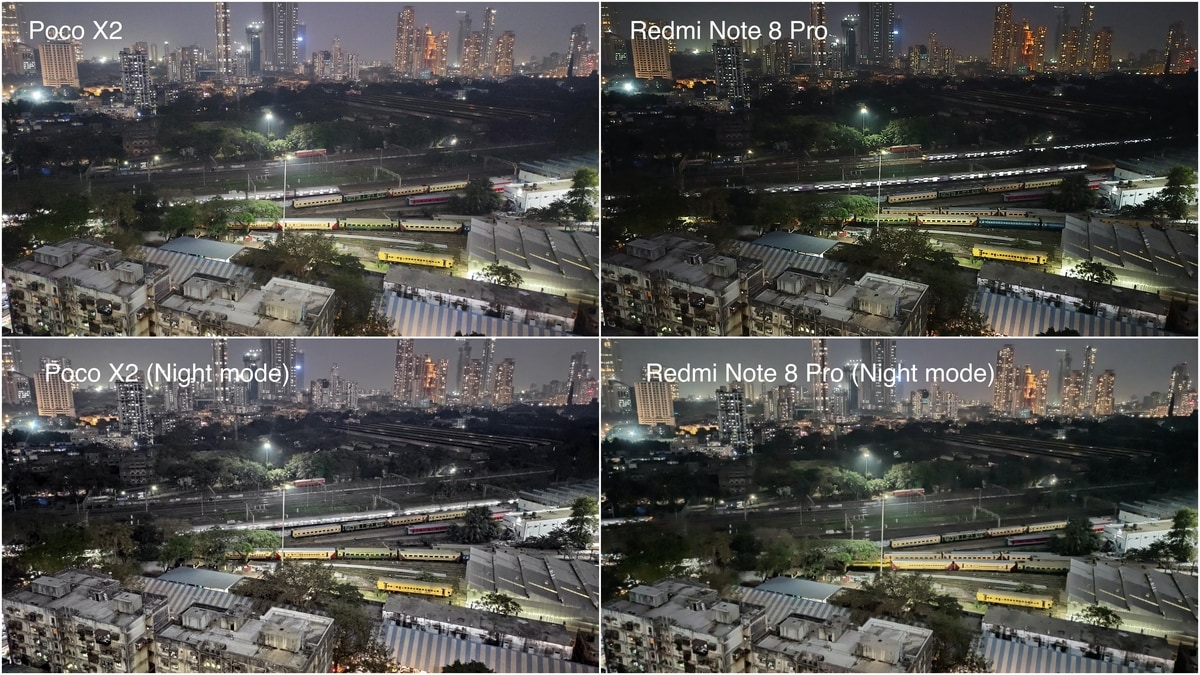 This being MIUI, you can expect a lot of spammy notifications and ads popping up in your notification shade. They’re less frequent on the Poco X2, but we still noticed notifications promoting content from the stock apps such as Mi Video. Thankfully, you can disable ‘online promotions’ and ‘push notifications’ for this app, which should help reduce notifications clutter.

It was a close fight between the Poco X2 (Review) and the Redmi Note 8 Pro (Review), but between the two, we feel that the Poco X2 is worth the premium it commands. For the extra money, you get fewer ads in MIUI, a smoother display, and more capable cameras for shooting video. The Poco X2 is a little bulkier than the Redmi Note 8 Pro and it only comes in flashy colour trims, but other than this, there’s little to complain about.

The Redmi Note 8 Pro has long been our go-to recommendation in this segment, and even now, the base variant is still one of the best phones you can buy for under Rs. 15,000. However, when it comes to the higher-end variants, the Poco X2 offers better value for just a bit more money.

Can Samsung Galaxy S10 Lite, Note 10 Lite dethrone OnePlus 7T? We discussed this on Orbital, our weekly technology podcast, which you can subscribe to via Apple Podcasts or RSS, download the episode, or just hit the play button below.