On the sidelines of Qualcomm’s Snapdragon Tech Summit, we had the chance to play around with the company’s reference device, powered by the Snapdragon 865 SoC. This is Qualcomm’s latest flagship SoC that was announced at the summit in Maui, Hawaii and will be seen in all major flagship Android smartphones in 2020. With the Snapdragon 865, Qualcomm is promising up to a 25 percent increase in CPU and GPU performance, twice the performance increase in AI tasks and lower power consumption across the board. We got our hands on the reference device codenamed ‘Kona’ and ran a few popular benchmarks to compare it with existing devices.

It’s hard to tell if the reference device was based on an existing phone (if at all) but the design language was similar to older HTC smartphones. The back panel of the phone had a lot of cutouts for various connectors, presumably to be able to run diagnostics for components in the device. As for the specifications of the phone, it had a 5.9-inch QHD+ (1440×2880) display and was running on Android 10. These units were also equipped with 12GB of LPDDR5 RAM and 128GB of storage.

Qualcomm also mentioned that the Snapdragon 865 features a ‘performance mode,’ that OEMs can choose to use for certain applications. On the reference devices, we had to manually enable it but on commercial products, from what we understood, this could be automatically enabled in the background when a certain game or app is launched. Qualcomm has also clarified that performance mode doesn’t boost clock speeds but it simply makes workloads ‘appear’ 20 percent heavier to the scheduler, so tasks are moved from the little cores, to the big cores a lot quicker. We were told that this boost in performance does come at the cost of battery life.

Coming to the benchmarks, the ones that were pre-installed were locked to prevent any scores from getting uploaded to the Internet, but apart from that, they seemed like the latest versions that were available on the Google Play Store. 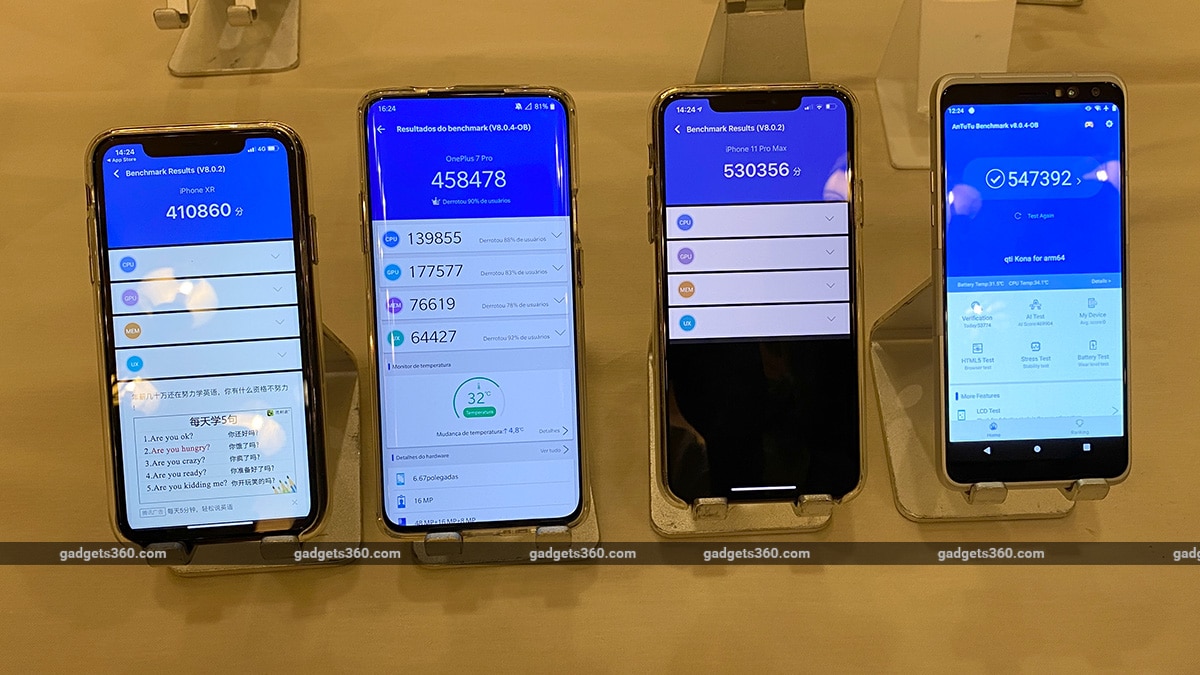 In AnTuTu, we managed to get a score of 541,899 points and in consequent runs, a little higher too. In comparison, the OnePlus 7 Pro (Review) running on a Snapdragon 855, returned 458,478 points. This translates to around an 18 percent improvement for the Snapdragon 865. When compared to an iPhone XR (Review) and an iPhone 11 Pro Max (Review), the improvement was about 33 percent and 3 percent respectively. The Snapdragon 865 just about manages to nudge past Apple’s current-gen SoC, in this particular benchmark anyways.

However in Geekbench’s CPU test, Apple’s silicon still seems unbeatable when it comes to single-core performance, scoring 1334 points on an iPhone 11 (Review), compared to 926 points from the Snapdragon 865. Multi-core performance was a different story though, as Qualcomm’s reference device beat Apple’s chip, scoring 3,438 points versus 2,548 on the iPhone.

The initial benchmark numbers certainly look promising and it seems like Qualcomm’s new chip is on par, if not slightly better than Apple’s current flagship SoC in some situations. Of course, benchmarks are not the be-all and end-all measure of a chipsets performance and for this, we’ll have to wait and see how regular apps and games perform when commercial phones begin arriving early next year, powered by the Snapdragon 865.

Disclosure: Qualcomm sponsored the correspondent’s flights and hotel for the trip to Qualcomm Snapdragon Tech Summit in Maui, Hawaii.